pawnshopmike said:
Looks beautiful brother. Some day I’ll own a 55. I’ve always liked them but for some reason I’ve never owned one.
Click to expand...

HRRC Flyer said:
My question is mainly for my fellow Futaba users. I've always used the thin blue heat shrink sleeves for my antenna tubes. Should I cut the ends of these plastic tubes so the ends of my antennas stick out or not worry about it?
Click to expand...

Don't worry about it! Even some come with heat shrink to protect the center conductor (aka Antenna) coming out of the gray shielding section of the coax. It covers about half the exposed antenna.
I also saw that one of your antennas appears to be kinked. I had one kink recently on my 7014SB that you probably saw in a recent post. Any kink coming from a coax will create some sort of reflected energy back to the receiver, luckily I don't think it matters too much with the exposed portion of the non-directional antenna. Impedance may have changed depending on the extent of the kink. I have found that there are plenty of 150mm IPEX port antennas on ebay, and as long as they did a good job building them a guy could change a matched set with equal impedance, meaning the OAL and exposed center conductor is the same length. The IPEX ports snap on and off for an easy swap. Like I said, You are probably fine. Mine bugged me like crazy, so I took a sacrificial receiver and borrowed the antenna from it. FutabaUSA told me there would be a six-seven week turnaround time to change the antenna which they did not have in stock... but only if I had proof of purchase or the US FCC sticker was still there.

I'll hop on that "always wanted one" train too. My first gasser was almost a Redwing Yak-55, those guys were willing to drop ship from china to me... ended up with an AJSlick. At any rate, the Yak-55 is one cool bird.

AKNick said:
I'll hop on that "always wanted one" train too. My first gasser was almost a Redwing Yak-55, those guys were willing to drop ship from china to me... ended up with an AJSlick. At any rate, the Yak-55 is one cool bird.
Click to expand...

It has a pattern plane look to me so there's that.

What was left of Hurricane Dorian, kept me out of the shop this afternoon. There was a little bit of moderate wind this afternoon, but quite a bit of rain. Tomorrow morning is going to be spent at my Buddy's house trying to nail down the flooding problem I'm still having on my DA-50. We are beginning to think the metering valve in the carburetor is sticking. If there is any time to work on the Yak tomorrow afternoon, that is what I will do. Hopefully, Sunday will be dry enough to fly my Extra. . . . .

As busy as I was this weekend, I managed to put a few minutes into working on my Yak. I decided it was time to go ahead and mount the ignition module for the red headed Beast. I decided to install it on the top hatch of the motor box. 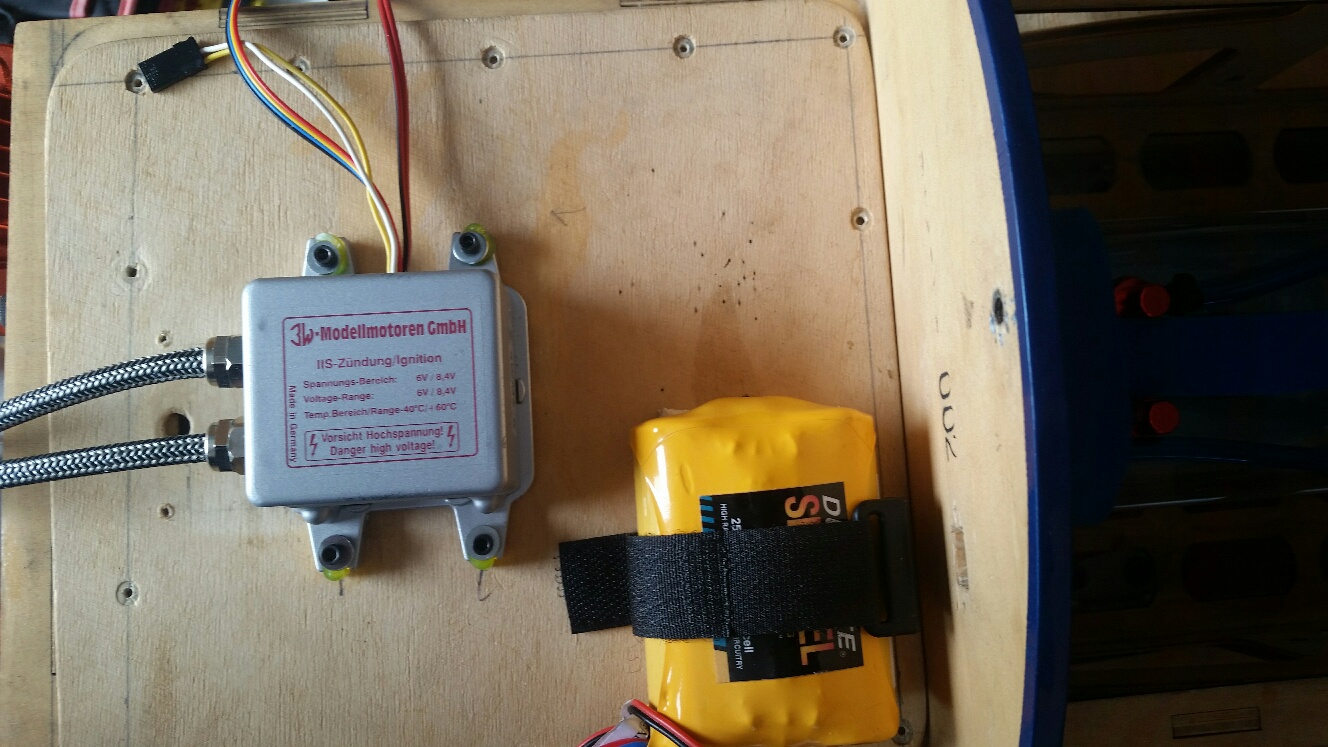 I talked to my flying Buddy about mounting the ignition module. He told me he has mounted all of his modules like this. 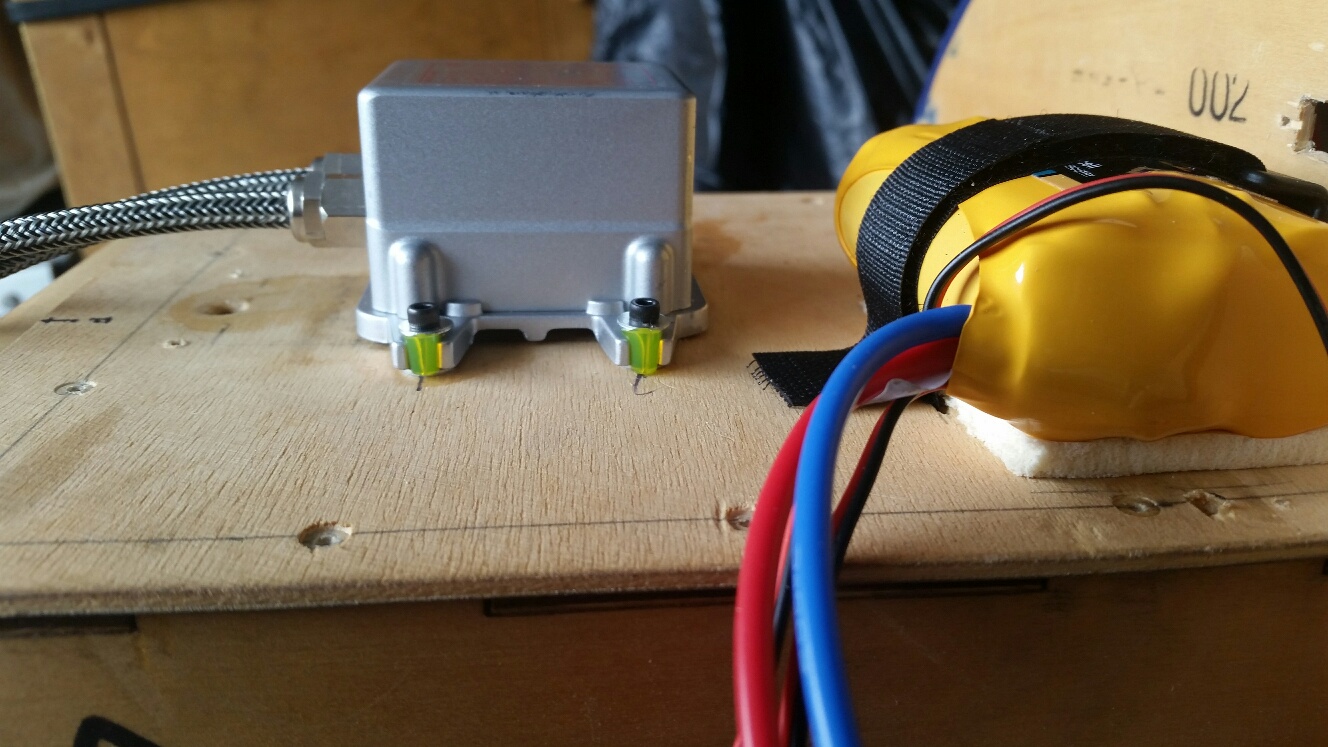 That's a 2-56 bolt going through to a blind nut on the bottom of the top hatch. There is also a washer above and below. The fuel tube acts as a vibration isolator which is why the bolts are not cinched down tight. The ignition battery is also mounted, but I still haven't made up my mind where I am going to put the switch for it. I need to get this plane done so I can have something to fly. The covering is really starting to come off quite badly because of age and I am getting leary of flying it any more until it is recovered. Hopefully I will get some time to work on it in the evenings this week.

. I went to the flying field Saturday so I didn't get anything done on the Yak then, but my Buddy and I put a good four hours into it today. I packed everything up and took the plane to his house this morning. He has a nice shady back yard so it stayed allot cooler without the sun beating down on us. The first thing we did was we set up linkages for the four aileron servos and got the sub-trims and endpoints matched to the control surfaces. The other thing we did was we got the beast balanced. I was quite surprised when we lifted the plane on the CG and it was quite tail heavy. . . . . . . Especially since my 3W weighs half a pound more than the DA does. So I moved the two receiver batteries back to the engine box behind the firewall where the original owner had them. Unfortunately, that didn't help much. So my Buddy went back into his house and brought out a 2" Tru Turn prop hub. When I asked him what that was for, he told me to bolt it to the prop. when we lifted it after that it came out almost perfectly balanced. After we were all done, we were sitting in the shade talking about having to move the batteries back forward and add nose weight. Then he reminded me that the 3W is 3/4" closer to the firewall than the DA was. Unfortunately, this means I'm not going to be able to use either of my two 5" Falcon carbon fiber spinners. I'm thinking about selling them since I doubt I'm going to need any spinners that large in the near future.

The last two things I have to do are make up & install the throttle & choke linkages and patch one last old switch hole in the side of the fuse. If I get that done and if my 2" prop hub gets here by Friday, I may have this thing ready to fly this weekend. . . . . . .

GSN Sponsor Tier 1
I have a question for you fellas. Does the AMA safety code require a manual on/off switch on the ignition battery for a gas plane or can O use an electronic switch?

AKNick said:
I could not locate anything in the AMA safety code or Handbook about any sort of ignition kill. This may be an event/club related stipulation.
https://www.modelaircraft.org/sites/default/files/memanual.pdf
edit: above 55lbs you need both.
https://www.modelaircraft.org/sites/default/files/documents/AMA Large Model Airplane Program Requirements and Inspector Information_AMA Document 520-A.pdf
Click to expand...