GSN Sponsor Tier 1
I made repairs over the years to my 35% Yak, patches were soon forgotten about as I just need it to fly. No pilots, no wheel spats, no graphics, just the plane.

Leave it up to me to do something just plain STUPID. . . .

It was cool and sunny when I got off work so I decided I would do some work on my Yak. The only thing I managed to do is cause real damage to the right wing that is going to be a real Pain In The A__ to fix. Let me start with picture #1.

View attachment 110797
Yes, that is one of the aileron servos going through the edge of the wing sheeting. No big deal right? The more observant of you Fellas, like @Snoopy1, will notice it's a bit worse than it first appears because the damage doesn't stop there. Let's continue with picture #2.

YIKES, what stool knob took that picture? As bad as the picture is, you can see the servo didn't just go through the wing sheeting, it also went through both of the plywood servo mounting rails. As you see in the picture (maybe), the lower plywood servo rail is broken in half. In case you're wondering, it does get worse. . . . .

It broke the top servo mounting rail out completely. So now I have to cut the wing open to see what it's going to take to fix this mess. To say I'm unhappy is an understatement. The ironic thing is that this happened on the third aileron servo and the first two went in without any problem whatsoever. Obviously, any chance of wrapping this plane up fairly quickly and flying it just got flushed down the toilet. . . . .

That must hurt especially when you do it and you know better. It happens to all of us and trust me it is always the last one that needs to be done. I usually need to walk away for a day or so and then come back at it and fix up the mess. Once it up in the air it will all be forgotten.
Last edited: Jul 25, 2019

Yesterday and today we got a bit of relief so I climbed on to the trusty Scag and got'er done! Even so all the grass clippings dried out almost immediately because of the intense UV still blazing down

. Have not flown at all since May .

Your Yak is really giving it to ya isn't it !? Don't you just love it!

49dimes said:
Yesterday and today we got a bit of relief so I climbed on to the trusty Scag and got'er done! Even so all the grass clippings dried out almost immediately because of the intense UV still blazing down

. Have not flown at all since May .

Your Yak is really giving it to ya isn't it !? Don't you just love it!

My week, this week did end on a pretty good note. Verne sent my little box of goodies to me and they arrived Thursday. . . . 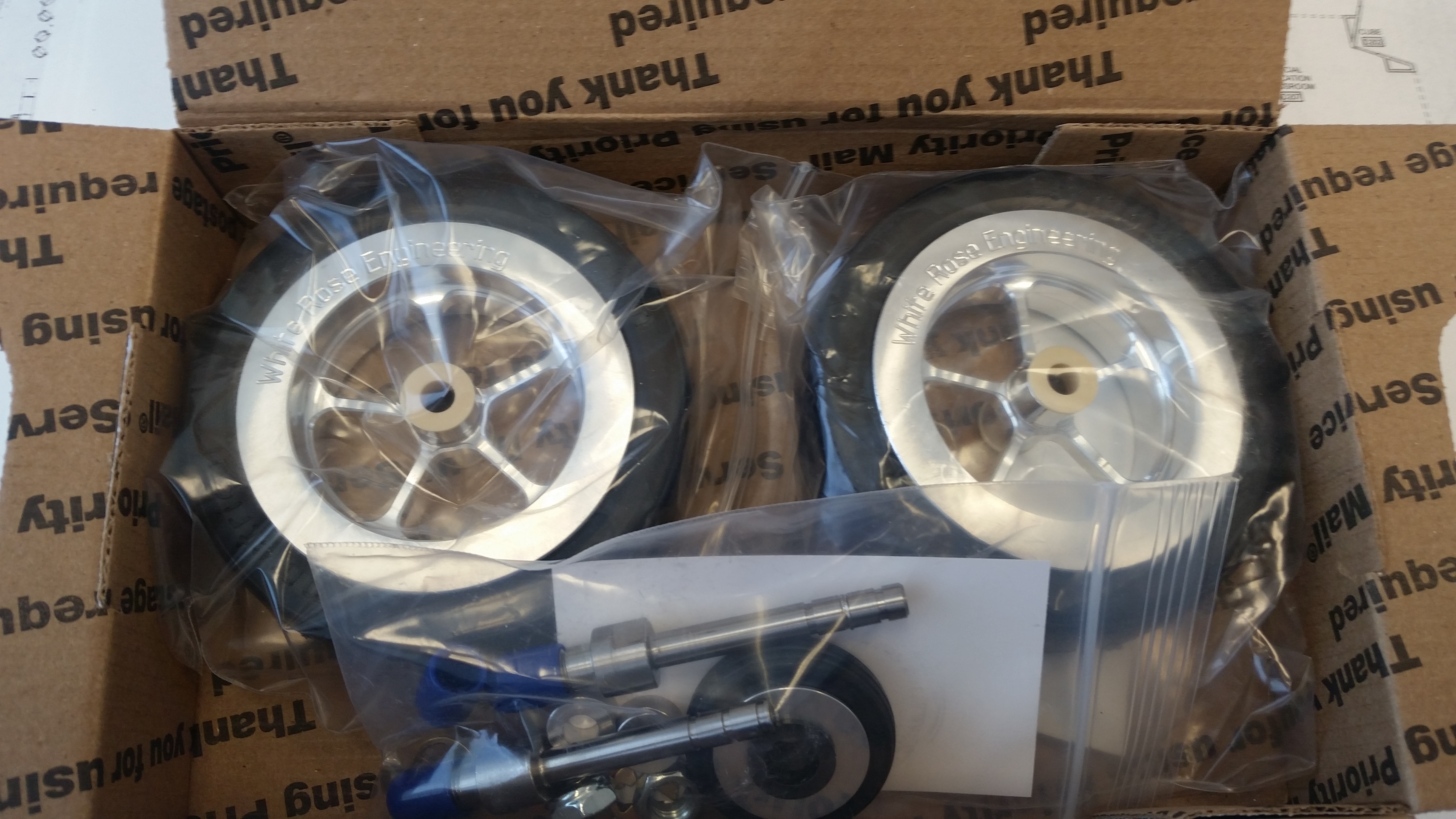 Let's see if I can get there on without anything else happening. I think the tail wheel is going to be a problem. I may not be able to use it.

My week, this week did end on a pretty good note. Verne sent my little box of goodies to me and they arrived Thursday. . . .

Let's see if I can get there on without anything else happening. I think the tail wheel is going to be a problem. I may not be able to use it.
Click to expand...

they will indeed. I'm starting to think David is @stangflyer 's secret operative

WMcNabb said:
NICE!!! Those will look sharp on the Yak 55!
Click to expand...

As it's turning out, my little wing mishap isn't the only thing slowing me down and keeping me from getting the Yak ready to go. As of today the Yak fuselage is at my Buddy's house. He called me this morning and told me he tried to run the DA-100 on his test stand and things didn't go too well. It seems the ignition module has gone haywire. It would start and idle with no problem, but as soon as he started to advance the throttle, the module would nine times out of ten, quit firing the left cylinder. He played around with it and got it to run up, but he said he would never trust the engine on a plane without at least a new ignition module. So, for those of you asking yourself, "why does he have the fuselage?", the reason is he told me he would modify the firewall for me so I can use my red headed beast in the Yak. . . . . .

. My Buddy said it would take him a couple of weeks or so and I told him I was in no hurry since I still have to fix the wing. So, hopefully it will be ready to go when the weather starts to cool off. . . . . .

I have a question for you Fellas, are any of you familiar with "Engel" carbon fiber props or know someone who is? My Buddy and I were talking about them the other day and we were thinking about trying one. The prop price from The G Man is $95.00 for a 28x10 which is comparable to other carbon fiber props.

. Rob doesn't like the White Rose wheels as much as I do because they are a little on the heavy side.

GSN Sponsor Tier 1
I talked to my Buddy this evening and my Yak is going well. As it turned out, like @acerc said, no modifications to the firewall were necessary. The instruction manual for the Yak said the prop hub should be between 1" and 1-1/2" in front of the cowl. My Buddy put 1/2" SWB stand-offs on the firewall and that put the prop hub 1-3/8" out. Tonight's task was going to be doing allot of measuring to see where to alter the cowl for the exhaust tubes off the mufflers. Sorry I don't have any pictures to show you guys, but I will get some when I get the plane back.

,
I got an email from my Buddy at work this morning and he told me he got quite a bit of work done after we talked yesterday evening. He was even nice enough to send me some pictures so I could share them with you Fellas. 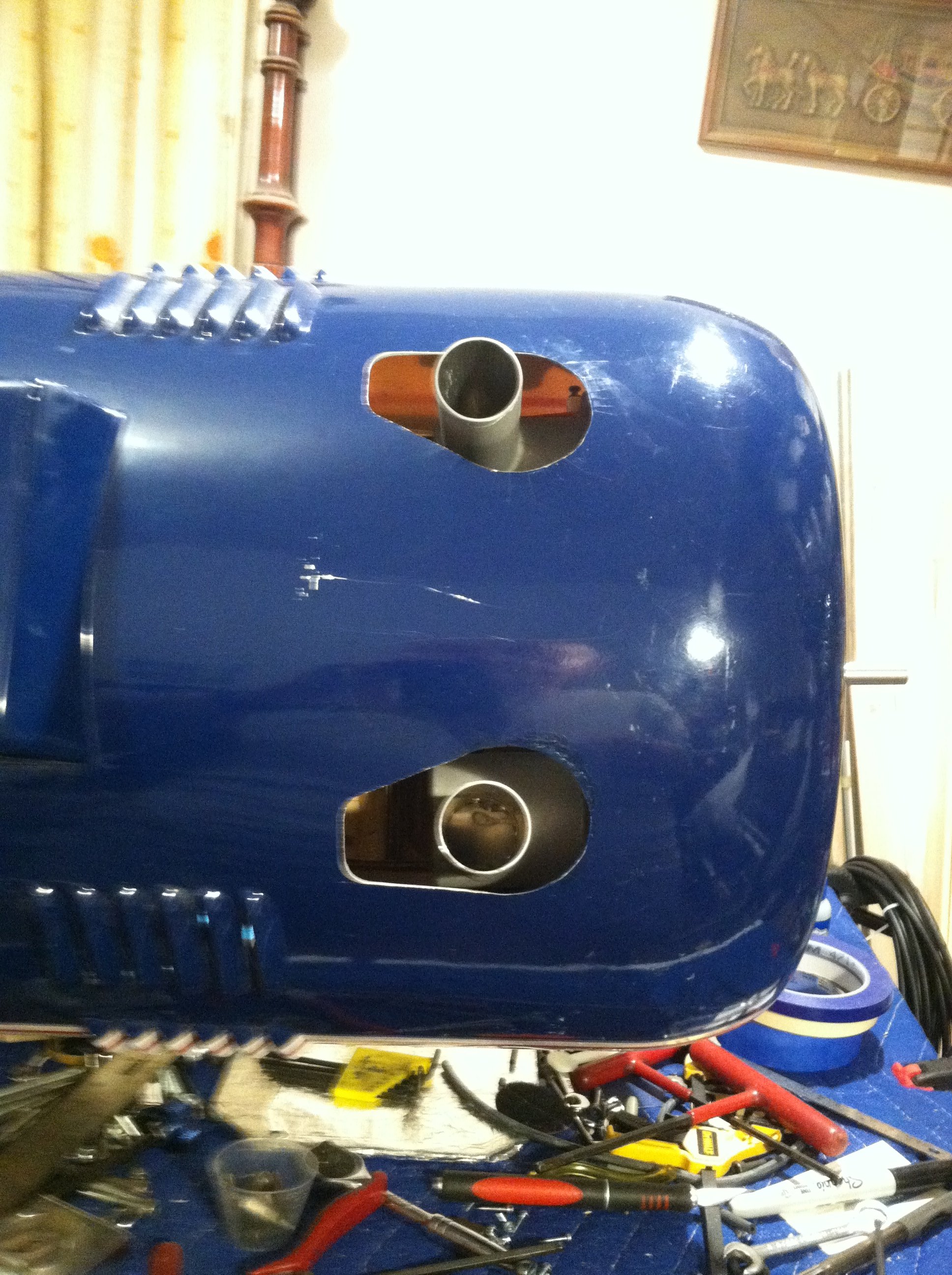 As you can see he had to slightly alter the holes in the bottom of the cowl to get it on around the pipes. 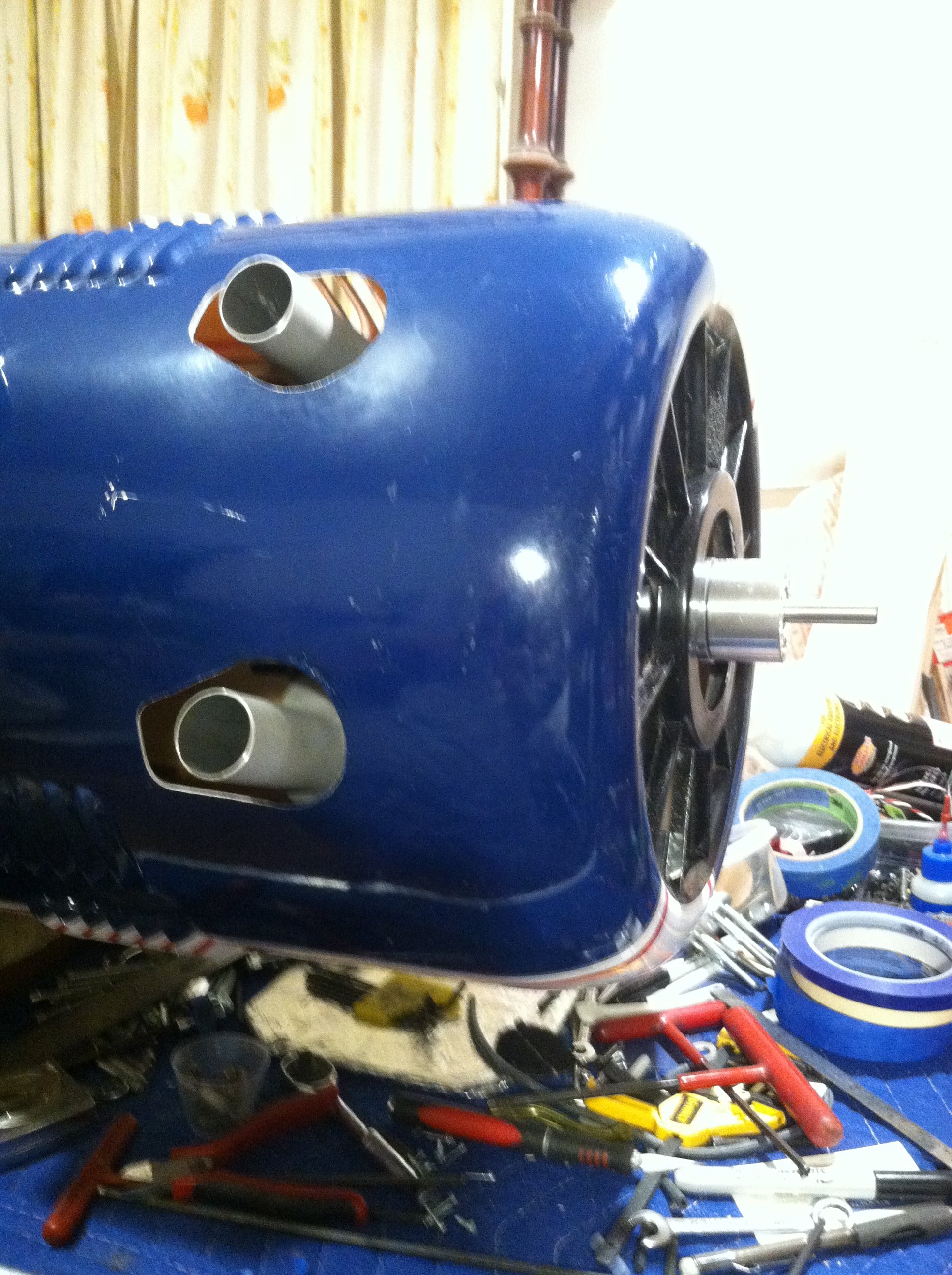 In this picture, you can see how far the prop hub sticks out in front of the cowl. You can see the right thrust as well. 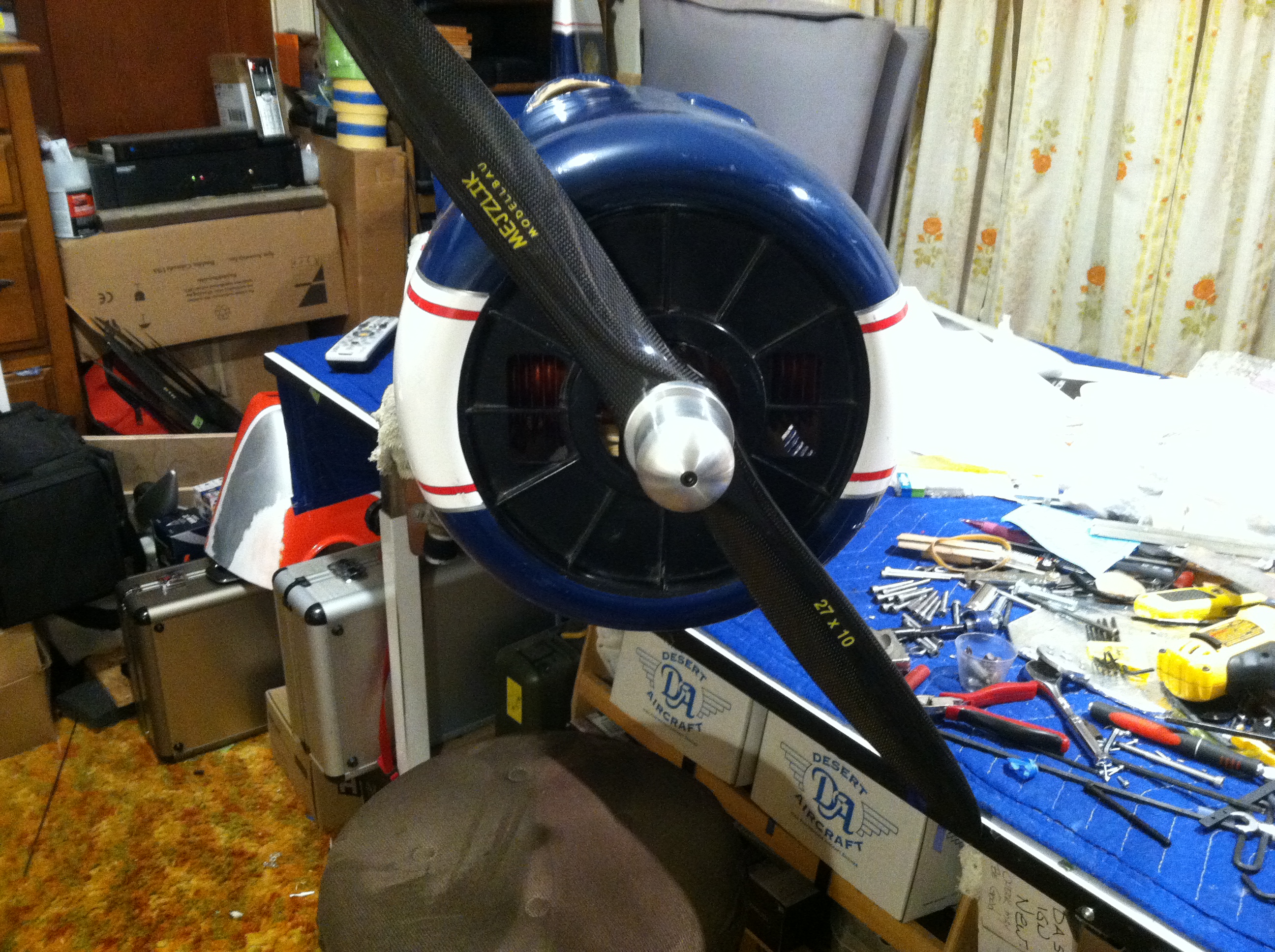 My Buddy and I talked Sunday night about my thinking of using a prop hub instead of a spinner, so he took this picture for me. You noticed he put a 27x10 prop on the engine. At my Buddy's suggestion, I called The G Man Monday and asked him for prop recommendations for my red headed beast. Gerhard said this engine will rip any prop 28x10 or smaller. He said if I wanted speed (which I don't), he'd suggest a 28x12. If I wanted pull, he suggested a 29x10. Out of curiosity, I asked Gerhard what he'd recommend for a 3 blade prop, his reply was a 26x10. I had wanted to try the Engel props he sells so I told him I would like to order one of each that he recommended. He checked his stock and as it turns out, he didn't have the Engel 29x10 in stock, so I ordered the 26x10 3 blade from him. When I finished talking to Gerhard, I called DA and ordered a Mejzlik 29x10. Both props should be here tomorrow. 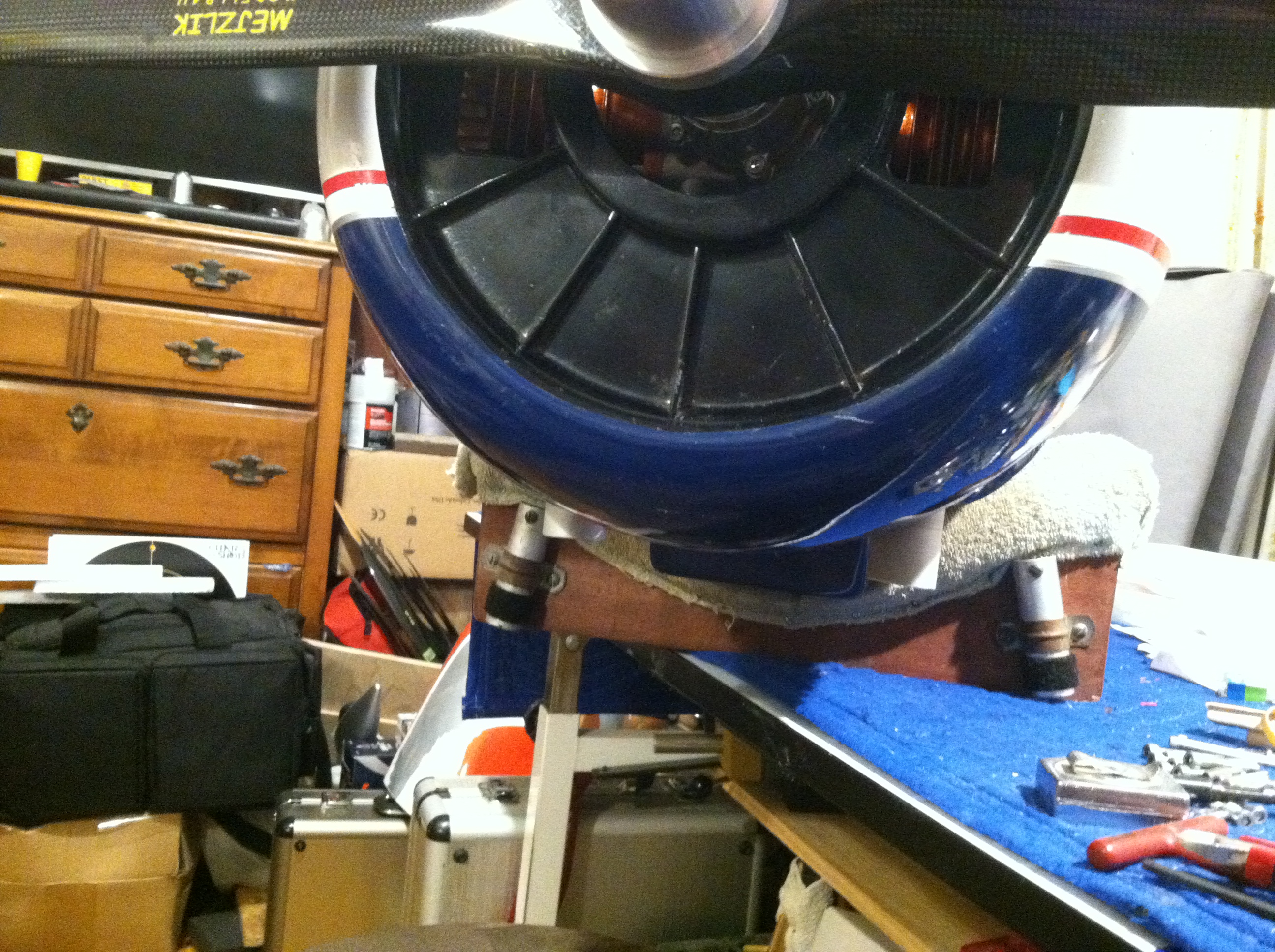 My Buddy told me he had to shorten the muffler pipes to get the cowl on. I said that was fine because I didn't want to see long pipes sticking out of the cowl. 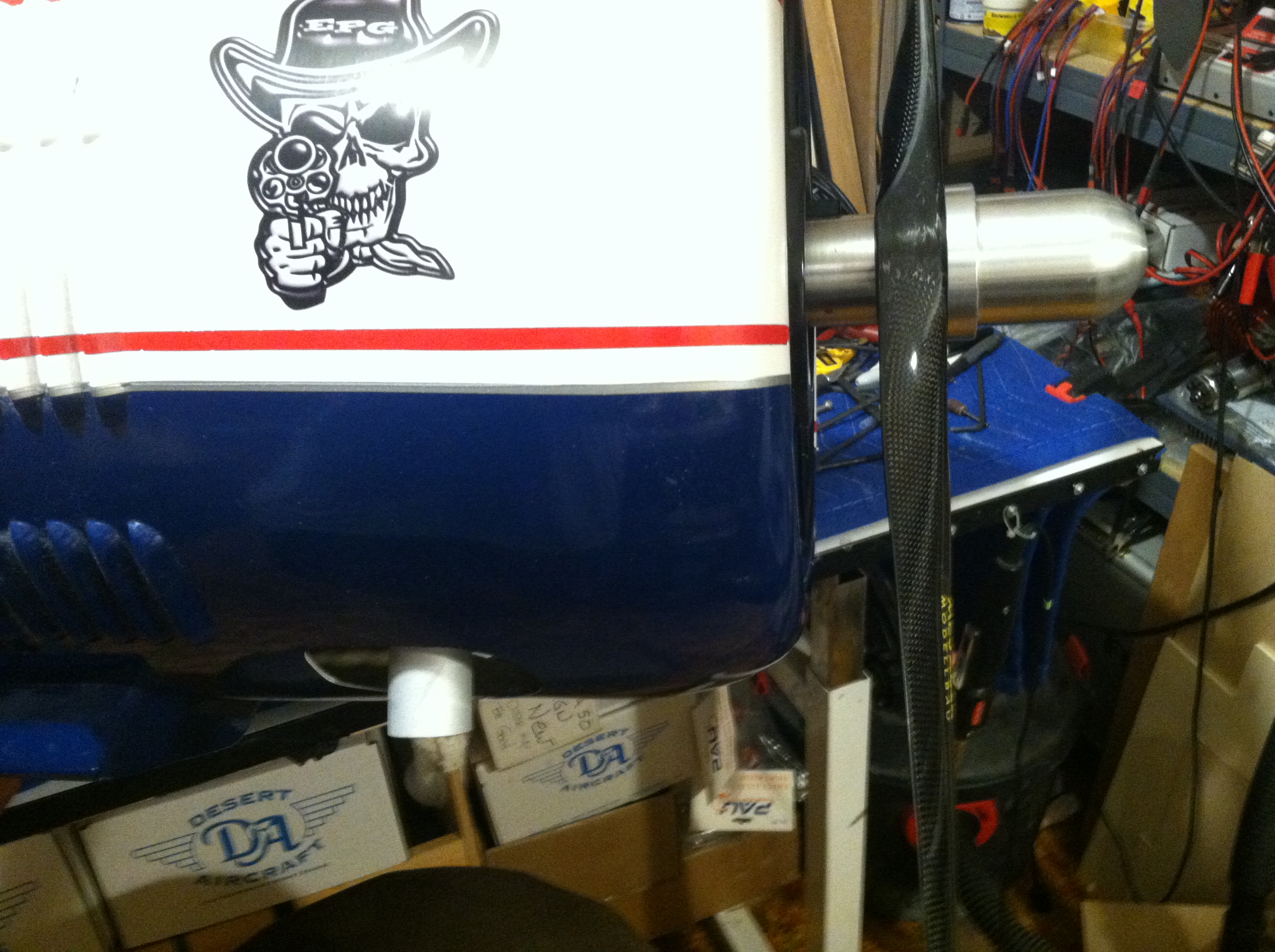 In this picture, you can see the up thrust that was built into the firewall too. 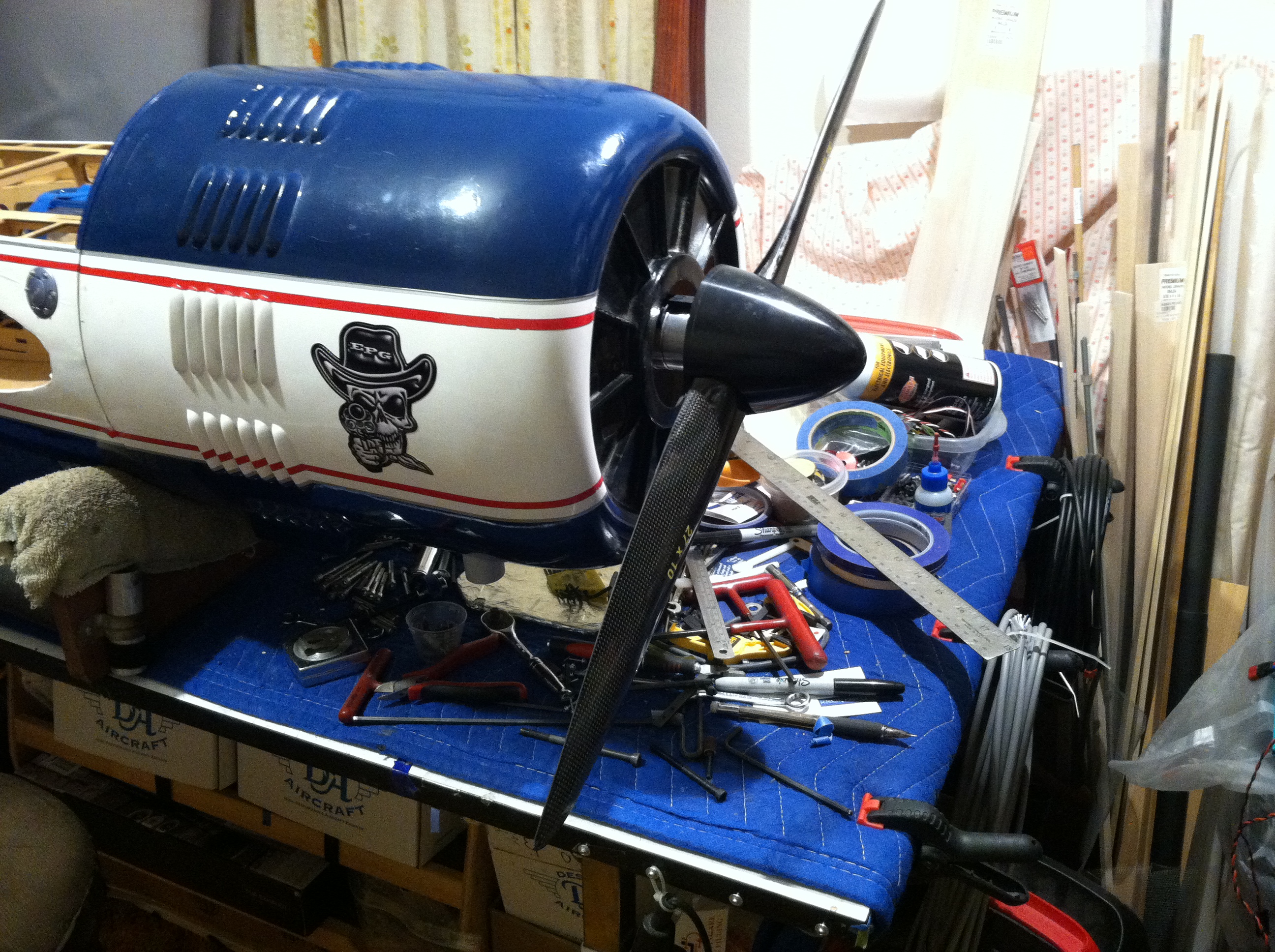 My Buddy took this picture, as he said "for the heck of it". That is a 5" P-51 spinner. After my Buddy mentioned that he ended up not using 1/2" stand-offs to help in putting the cowl on easier, I really got to thinking. The Beast is quite a bit heavier than a DA-100. The fact that the engine is 3/4" closer to the firewall than the DA-100 helps allot too, but those Tru-Turn prop hubs are HEAVY! So I've decided to go the lite route to help balance and get a 5" carbon fiber spinner. My problem is that I want one with an aluminum backplate and I cannot remember who makes them.

Hopefully, my next update will be after we run the engine and I get it back with the fuse. I really CANNOT wait. . . . .